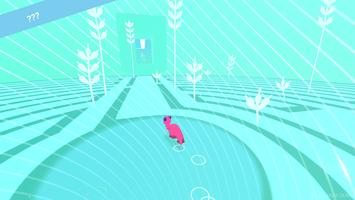 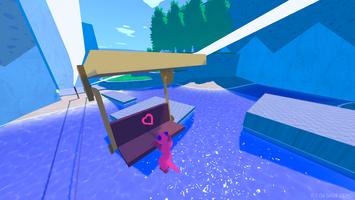 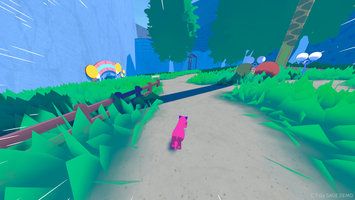 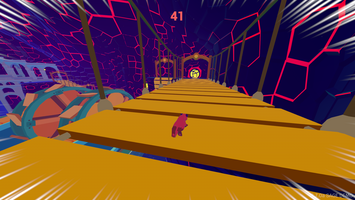 In DEMO several things planned months, if not years, finally see the light of the day in such way to form the smallest and most densely packed demo of Fech yet.
Plans for the online Networking a-la Journey had been outlined in late 2020, right after that year's SAGE; early tests were done in April 2021, while the proper approach and architecture were figured out around March of this year. The "power plant" is the first example of an enclosed level in Fech, that idea had been outlined sometime in 2019, proper planning only started in 2021 while the actual work progressed slowly throughout 2022 until the new concept artist stepped into the project and managed to fully focus on it in August. And lastly, my much beloved "chop chop" song finally has its own rhythm ara after 3 years since the first test.

Out of the three outstanding elements of this new demo, only the last can be called somewhat close to complete. There's much to polish and improve still!

As to end this introduction, you'll also see a lot of work dedicated to completely reworking the grass and terrain systems. Nicer, more accurate and more efficient.

HIGHLIGHTS:
2022-03-08 Fech online works! Several players can see each other and roam around the same server
2022-03-09 Networking submenu added: you can pick the server region and check the ping
2022-07-21 Many subtle QOL improvements to terrains throughout the game
2022-07-23 A new blade grass system has been fully implemented. More accurate, much more performant at the cost of more memory
2022-07-29 Zone cards added. Every time you enter a new zone/level, a card with its name pops up
2022-07-31 Improved clarity in dark scenes: world brighter at night, fech gets less shadowed
2022-07-01 Full proper autosaves implemented: the game now saves the latest checkpoint every time the screen turns black/white or the main menu is accessed
2022-08-03 Ziplines! They exist and work
2022-08-07 Rat elevator addded. A landmark to be interactable
2022-08-19 Remade all ferrest and quarry terrains
2022-08-20 Networking sfx and basic player interactions have been implemented
2022-08-24 Ara chop chop finally added to the game
2022-08-31 The new power plant level is fully playable, it cannot be overstated how much effort went into creating new assets here
2022-09-02 Peppy race added

CHANGES:
-Minor level design fixes to the Ferrest
-Rebuilt the terrain system to be mesh-based instead of heightmaps. It's much lower poly now
-Pollen particles are now a vfx, this offloads them onto the GPU instead of the CPU
-Added option to disable rumble
-Sensible improvements to the overall navigation thanks to more dirt paths
-Many adjustments to NPC positionings
-Optimized Discord Rich Presence. Nobody is going to notice it
-Added secret code to track zone changes. I've been told it's useful for Auto-splitters
-Pausing the game while Fech is sleeping doesn't freeze time
-Adjusted Fech's DoF to only come into effect when the camera is pointing to Fech's face
-Added collider to Porfu's shop
-Grass is more colorful
-Increased jump buffer frames (from 5 to 8)
-Minor improvements to running on treadmills (view re-centering, better rolling)
-It's now slightly easier to keep control of Fech at high speed
-Added ripple effect to the kyuknos
-Split the quadruped walk animation into two versions: slow and fast. Fech now looks quite nicer at slow speeds and marginally better at max speed
-Fech bubbles underwater
-Improvements to the looks of the water
-Fech dook particle! You can see it play on nearby online players too
-There's several new rats!
-Finally added sfx to quarry trees, I never realized I hadn't done that yet
-Small visual improvements to rhythm aras, most notably the framing around arrows near the gate
-The paw step vfx has been temporarily removed while a more faithful solution is researched
-Pal pulling is now disabled by default for rhythm aras without any turns
-Improved the feel of hitting an obstable in a rhythm ara with camera shake
-Added damage points to ara obstacles
-Slightly improved the ara points UI

FIXES:
-Simplified the grass shader. Should improve compatibility with a much wider array of system setups (no more grass being too bright)
-Fixed tiny oversight that would get antialias settings not saved, and thus reset every time opening the game
-Fixed a major editor bug, now it can't freeze due to a music syncing bug anymore. While this doesn't directly impact players in any way, it improves my internal workflow by a lot as I can safely listen to the music ingame for the first time in 2 years, as well as lose less time to crashes and freezes. (thanks /tmp/moony)
-Fixed Discord Rich Presence bug in rhythm aras (they would display as "checkpoints" instead of their names)
-Fixed Fech respawning far away from the intended spot when dying for the first time
-Very small fix tied to resetting the game
-The mouse cursor is now restrained within the game window in windowed mode
-Partially fixed bug that would make the jump animation trigger not in a consistent manner
-Fixed Fech's speed in the first rhythm ara. He was synced to 116bpm instead of 110. My bad!
-Fixed a toon shader bug that affected the look of the decals (most notably on lamps)
-Removed excessive underwater overhead
-Fixed issue with fall damage after respawning
-Minor polish to the quarry shader, the unclimbable stripes are consistent with the rest of the game now
-Removed the empty language selection menu. To be re-added sometime during the early access
-Fixed bug that prevented players from pal pulling up a slope. No more control inconsistencies!
-Rhythm aras are no longer randomly offset by by 4 beats at the start!
-Fixed lack of collisions on the rhythm ara tunnel (noticeable when attempting to backtrack the level after completing it)
-When starting a rhythm ara, the camera view gets correctly re-centered
-Fixed occasionally incorrect points color in rhythm aras
-Largely fixed collision clipping bugs. The solution is not expected to cover 100% of case scenarios.

KNOWN BUGS:
-Fech may get temporarily stuck at the edge of a downward slope
-The advanced crane was temporarily made incomplete
-Various issues climbing and sliding down walls of inclination close to 90°
-Infrequent camera collision issues
-Camera doesn't properly adjust to underpasses
-Small issues with navigating the menu
-Jumping the frame Fech lands leads to incorrect animations