Fech The Ferret 0.7.4alpha - Second round of fixes! 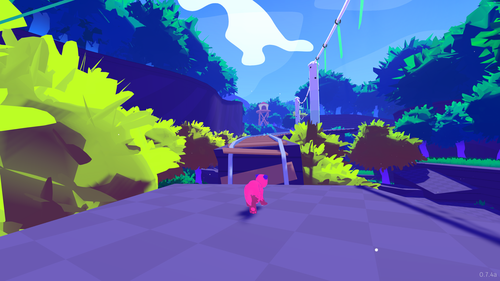 Welcome to the second set of fixes of Fech The Ferret's Early Access!
On this update we focused on addressing major bugs that were still present in the game - such as the infamous second rhythm ara freeze - while carrying on with zone design tweaks, visual updates and general optimization.

2022-10-27 The quarry zone is shorter and flows better thanks to a major level design change
2022-10-27 Snappy position syncing of players online. Delay between peers has been cut down to the sum of their pings
2022-10-28 Added rails to the start of the ferrest (only visual)
2022-10-30 Progress is saved to a file. Power plant level completion and NPC challenges are saved now

-Improved and optimized the grass detection algorithm to support compressed textures
-Massively reduced polycount of out of bounds river poplars. Performance improvements expected on systems with old or integrated GPUs
-Improvements to occlusion in the river
-Small visual improvements to raindrops in the river
-Added raindrops to props in the river
-Camera lags behind Fech when entering an enclosed level
-Loading of enclosed levels is slightly faster now
-Any time Fech clings to a wall the view aligns to it. Previously it would only do so at the start of a walldash
-Two new tunnels were added to the quarry to make the level flow more nicely and cut down on repetition
-The new save system enables more flexible progress saving
-New bridges in the power plant make the level look nicer
-Small visual improvements in the sewers
-Added more bridges in the river zone
-Made the start of the ferrest more accessible
-New nicer looking river waves

-Fixed MAJOR oversight. The sewers are visible and accessible again
-Small menu settings fixes
-Fixed a NPC prop in the quarry
-Properly set variables for the comically oversized radio rat challenge
-Fixed stamina recharging bug
-Life HUD no longer displays while Fech is sleeping
-Fixed major bug that would prevent from loading the second ara in the ferrest. It was caused by another scene load happening concurrently
-Added zone card to the third rhythm ara

-Some longtime issues related to climbing and sliding down walls
-Infrequent camera collision issues, mostly tied to underpasses
-Every time there's a scene change, the mouse cursor seems to mysteriously reappear
-Some jank in in enclosed levels
-Be careful with autosaving in the river zone. The river itself is a valid save point

This is the last update of the 0.7a cycle! Next update will be a major one (0.8.0a) and it's scheduled for the end of the year. You can get an idea of what's to come with the roadmap here below. See you next time!