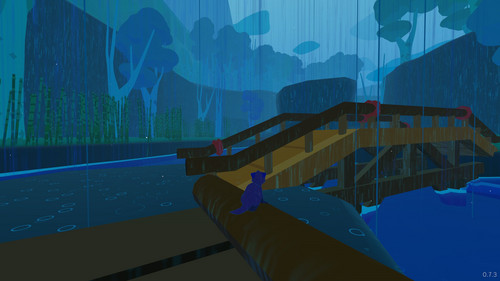 Hello and welcome to the first update of Fech The Ferret's Early Access!
It's been exactly a month since the initial release of the game. We took this time to carefully begin touching up and improving nearly all aspects of the game, most notably known ara bugs and a early polish pass on the river zone.
This was also a great time to begin working on the next major update schedule for December, but for now I'll just get to the contents of the new build and save that for another occasion. So get ready for a long read as I get to list every change, addition and fix made in the past 30 days.

CHANGES:
-Reduced Fech's overall shadowing
-Optimized the chestnut trees in the ferrest
-Removed few unused assets
-Jumping off a pole now always puts Fech in quadruped position
-Changed grass color in the river zone
-Added collider to mill
-Added ability to entirely disable outer trees for performance optimization
-Foliage slider now also affects LOD bias
-Added ability to disable grass (only for testing and extreme performance optimization measures)
-Chestnuts shadows are slightly brighter
-Reverted particles on pollen trees because... vfx actually had no positive impact on performance? huh, didn't expect that one
-Pollen triggers are a little more visible now
-Few new props and small changes in the ferrest
-Optimized collectibles
-Added LOD to river poplars
-Optimized Aucritas intro by disabling camera rendering
-Optimized Kyuknos by correctly disabling the world geometry
-Some leaf optimization by making use of the "zone part" occlusion system
-Standardized Fech's collision system for higher accuracy
-Adjustments to Fech's animation speed on ara chop chop. No more extremely fast run
-Added input UI for some interactables. Still a WIP
-Standardized the jumping speed on the poles. This makes challenges in the quarry (especially the power plant) much more accessible
-Minor improvements to the power plant (mostly visual feedback with the spring and timer)
-You know what, more pollen trees at the start of the ferrest now so to better distinguish it from the rest of the ferrest
-Fech's notes now change based on the zone he's in. Only ferrest notes currently exist
-River canes are much lower poly than before and stylistically more in tune with the game
-Bridges in the river zone!
-There's grass in the river zone now
-Improved occlusion in the river zone
-Occlusion culling is slightly more accurate
-Increased thumbstick deadzone

FIXES:
-Fixed bug where attempting to exit an ara immediately after entering it could lead to falling out of the world
-Fixed major bug that soflocked the game and prevented from playing ara good filter
-Added colliders that prevent clipping through faded entrances/exits
-Fixed a bug tied to respawning out of an ara
-Fixed Fech's complete lack of shadowing (I don't know why this keeps on breaking and unbreaking)
-Fixed shader bug in the displacement of tree foliage (empty spots would appear)
-Small fixes to ara entrances
-Fixed major bug that would cut off ara chop chop's music midway through and make its exit inaccessible. I had simply cut the music track short by mistake
-Restored LOD for the chestnut trees
-Fixed major shader bug that would make shadows not work for seemingly no reason (the past several builds alternated between having this bug or not)
-Fixed leaf positions
-Partial fixes to modern crane
-Fixed some water triggers in the river zone
-Small fixes to power plant poles
-Fixed collision bugs of the river canes
-Fixed a bug that would make Fech immediately run from a still position
-Removed unwanted ability to pal pull during the intro cutscene
-Patched out the unwanted ability to open the pause menu during cutscenes
-Fixed camera angle bug when pal pulling while starting a rhythm ara section
-Fixed rat protesters dialogue variable when the power plant gets fixed (they cheer instead of demanding to fix what's already fixed)
-The "fixedness" state of the power plant no longer resets every time you enter it

KNOWN ISSUES:
-Various issues with climbing and sliding down walls of inclination close to 90°
-Infrequent camera collision issues, mostly tied to underpasses
-Every time there's a scene change, the mouse cursor mysteriously appears
-Some jank in rhythm aras
-Be careful with saving in the river zone. The river itself is a (unwantedly) valid autosave point

And just like last time, here's the roadmap as it currently stands. See you in the next update!