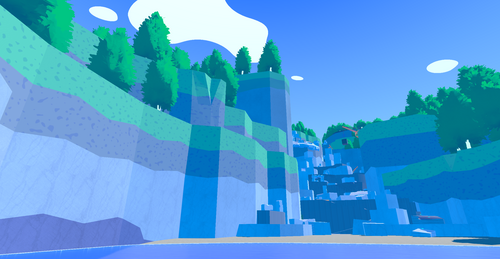 Note: this build is exclusive to patrons of the "tester" tier at
https://www.patreon.com/raoulwb

CHANGES:
-Tail physics improvements
-Substantial change in how gravity works underwater
-Slightly increased Fech's noodliness
-Minor changes to the colours of the ferrest
-Increased Fech underwater survival time by 1 second
-Improved sliding physics
-Major adjustments to the illumination system
-Smoother illumination transitions
-Reduced clouds detail
-You can now stop walldashing by pressing the dash button again
-New object shader, used for all props
-Springs are triggered earlier, as soon as Fech starts hitting them
-Added dedicated camera shots when Fech is using cranes or talking to NPCs
-Added pin to the rhythm ara
-Changed the look of obstacles in the rhythm ara
-Post processing improvements in the rhythm ara
-Added little twirl animation when Fech enters the pin ring
-Fech is a tad more visible in the rhythm ara
-Small level design changes in the area surrounding the rhythm ara
-After completing the rhythm ara you're brought on the other side of the wall
-Improvements to springs, you now get a little bit of time to see the animation and plan your jump
-Rewrote the setting menu to write to a JSON file. Reordered options, added new graphical settings and removed unused ones
-Music slowdown effect when you fail the rhythm ara
-Although present, zones after cava rattina are inaccessible (this is by design)

KNOWN BUGS:
-There are a few evident glitches at the start of the build
-There seem to be random issues with disabling  jumping and ability to stop dashing in the rhythm ara
-Selecting via controller in the menu has still not been re-implemented
-Landing on a spring during/after a jump leads to inconstant results
-Rhythm ara is sometimes offset by 4 bars
-It's still possible to land on some parts of the trees, including the tip
-Although very infrequent in the newer builds, some major issues with wall dashing are still present
-The camera collision system has yet to be reworked
-The swimming mechanic doesn't play as intended yet as it's still very much undercooked as of now
-Russian and Japanese characters are not supported yet
-Localization is temporarily unavailable due to a Unity bug. The game will freeze for a few seconds after starting it
-Visual issues in dream02
-The Aucritas intro has a transitions that's too harsh on the eyes
-Odd stutters when jumping on slopes
-Out of bounds trees are too inefficient
-It's not possible to move the camera with the right thumbstick after exiting the rhythm ara
-Day-night cycle seems not to repeat
-Closing the game makes it crash?

Heh, that's what happens when you don't make any builds for 3 months.