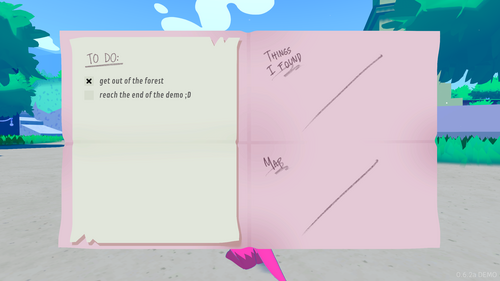 In this DEMO update you'll find fixes largely based on community feedback, small changes that impact the overall polish and a new ingame menu that will prove quite useful in the near future.

HIGHLIGHTS:
2022-07-01 New grass system in working condition, not yet implemented
2022-07-14 Added a proof of concept of Fech's new notes menu (press select/delete to see it)

CHANGES:
-Replaced the old pal pulling drift particle with a vfx that better fits the style of the game
-Music volume is decreased while in the menu
-Music volume has been slightly increased ingame
-Added a small disclaimer instructing on how to reset the game progress, it shows up when trying to reset
-Added a notice telling about Fech's notes
-As per request, it's now possible to turn off the autocamera in the controls menu

FIXES:
-Fixed keyboard controls bugs: they were caused by the game checking for a controller to rumble even if not present
-Fixed visual glitches that could happen if rolling while pal pulling
-Fixed Powie's positioning during a pal pulling
-Repeatedly pressing the the jump button while climbing no longer lets the player climb higher
-Fixed bug that would make Fech stuck when trying to exit a rhythm ara

KNOWN BUGS:
-Fech may get temporarily stuck at the edge of a downward slope
-The advanced crane was temporarily made incomplete
-Rhythm ara is sometimes offset by 4 bars
-Some issues with sliding down walls of less than 90° while clinging to them
-Rare camera collision issues
-Camera doesn't properly adjust to underpasses
-Clipping through walls is possible in rare cases. Improvements to the collision system are needed
-An occlusion culling bug close to the end of the demo
-The controls menu is incomplete